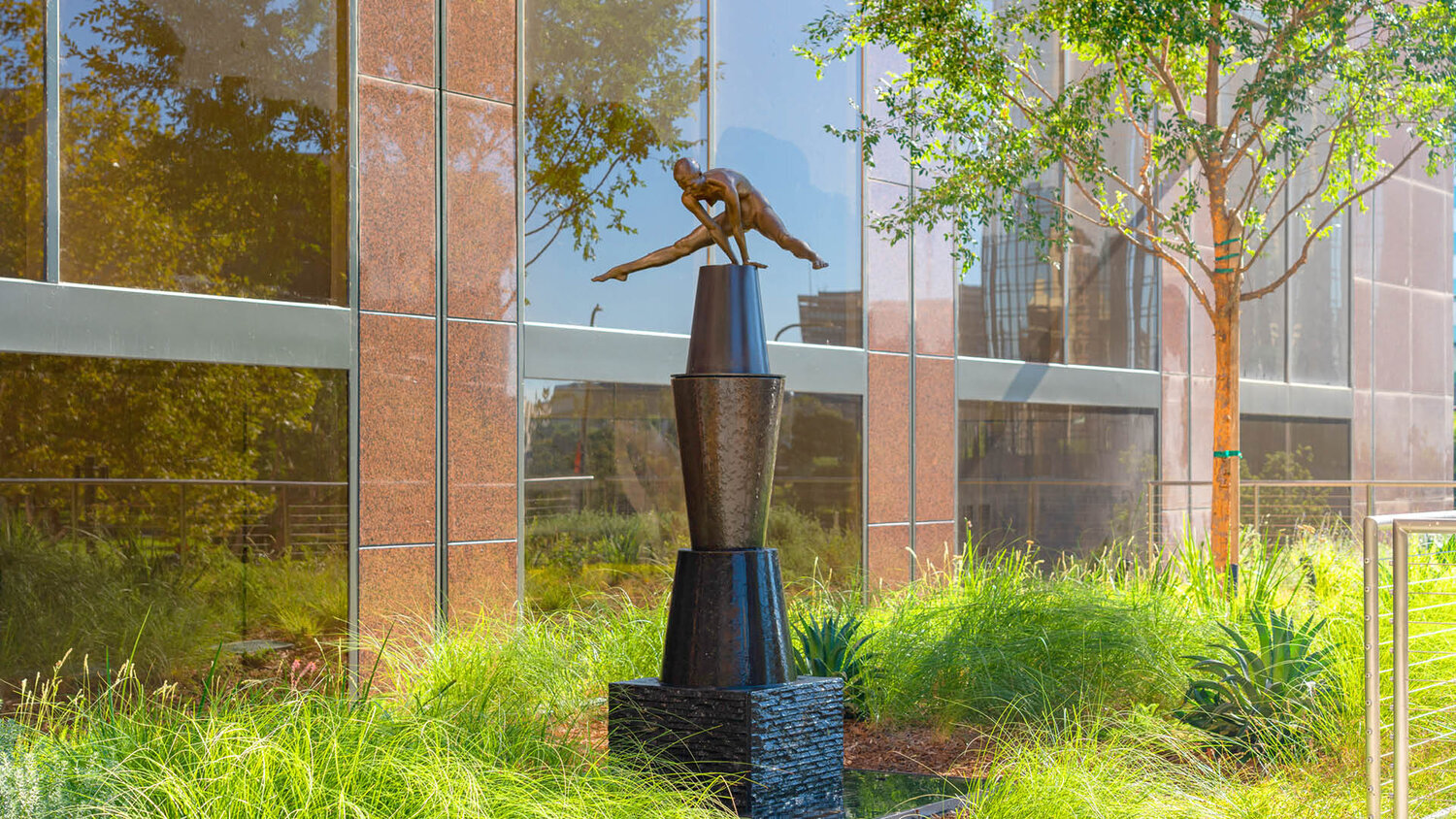 The Graham Garden Brings Classic Sculptures Into the Open

When the Community Redevelopment Agency set out to spruce up the Grand Avenue corridor in 1985, a key element was the incorporation of sculpture into renovated public spaces. Among the artists tapped to create and situate works was the inimitable Robert Graham, whose bronze sculptures from the intimate to the monumental have beguiled viewers for decades. Now, some 35 years later, the Grand Avenue Arts Corridor seeks to make the upper roadway sing again — just as an expanded consideration of styled outdoor spaces has become even more salient since the pandemic moved most of public life outdoors.

An especially elegant and unexpectedly emotional highlight of this plan is the new Halo — a redevelopment of the Wells Fargo Center’s atrium and surrounding plaza, which will fully open later this year, but whose Graham Garden already opened to visitors. As of August 19 — the late artist’s birthday — the original suite of bronze Figure Fountains from the mid-1980’s have been re-established, and now punctuate fresh landscaping and archetypal downtown views throughout a social distance-friendly courtyard which, these days at least, is so quiet that even at midday the gentle gurgle of the fountains beneath the figures is as audible and charming as a babbling brook.

The concept and design of Graham Garden was enacted by fine art advisor Karen Amiel, and, importantly, Graham’s son Steven Graham who has been operating the Robert Graham Studio and Estate since the artist’s death in 2008, overseeing both his legacy and the finishing production on studio editions. For his part, Steven Graham expressed to the Weekly how exceedingly proud he is to be able to install these important works in a space that is not only beautiful, but is 100% free, open, and accessible to anyone 24 hours a day.  Fountain Figures I–III, 1983 and Fountain Figure IV, 1986-87, all cast bronze, have a distinctly athletic theme — with Graham’s trademark lithe nude figures striking sportswoman poses and performing feats of strength and poise like vaulting and headstands. Perhaps these ideas were on his mind as he was creating these works, given that Graham’s first major civic commission came from the Olympic Arts Festival that coincided with the 1984 Los Angeles games.

Steven describes a very hands-on, even quite personal, experience seeing this project to fruition — something much more involved than just moving sculptures from here to there. And in fact, the installation itself is more poetic than a straightforward centering. Graham describes that while the largest of the works, Fountain Figure IV, is undeniably an incredibly regal presence in the plaza, Fountain Figure III’s water feature is very much at footstep level, and the other two works are rather more tucked into curves within the landscaping. Overall, they lead you through the space and each creates its own unique set of encounters. Fountain Figure II is arguably best viewed with your back to the space, as if in private. The variety of backdrops and times of day across the wide-open sky play with the works and the waters are more than Instagram-ready.   Robert Graham, Fountain Figure III, 1983 (Photo by Shana Nys Dambrot)

Buoyed by Brookfield Properties’ obvious dedication to the arts as part of their vision, Graham was able to personally ensure the works are installed and honored in a way that takes great care with his father’s dream of putting objects of beauty and contemplation everywhere he could — a poignancy reinforced by the official opening date falling on Robert’s birthday, and a gift further amplified by our pressing need for more livable public spaces.

Speaking of which, as the Halo DTLA website helpfully points out, and as Brookfield Properties’ Western Region Executive Vice President Bert Dezzutti says, “The sculptures of Robert Graham and Downtown Los Angeles are inextricably linked.” To wit, they map three other very nearby sites of important Graham sculpture — Dance Door at the Music Center Plaza and the Great Doors of the Cathedral which are both just up the block to the north on Grand; and Source Figure to the south, which is another splendid fountain, situated halfway down the Spanish Steps toward the Library. Why not make a day of it.